No more. The Mayor’s plan to warehouse New York City’s most vulnerable citizens in a neighborhood of warehouses, two blocks from the Newtown Creek Federal Superfund Site and one block from the Long Island Expressway – thereby creating a two to one ratio of actual residents to homeless shelter residents in the Blissville section of Long Island City – seems to have become the straw that broke the proverbial camel’s back. No more. The needs of the elites of Manhattan do not outweigh the needs of Queens. No more.

On Tuesday last, Councilmember Jimmy Van Bramer grilled DHS Commisioner Stephen Banks about this plan at City Hall, and community members gathered on the steps of City Hall in protest over the Mayor’s plan. Assemblymember Cathy Nolan sent her representative David Agioloro to show her support for the cause. No more. 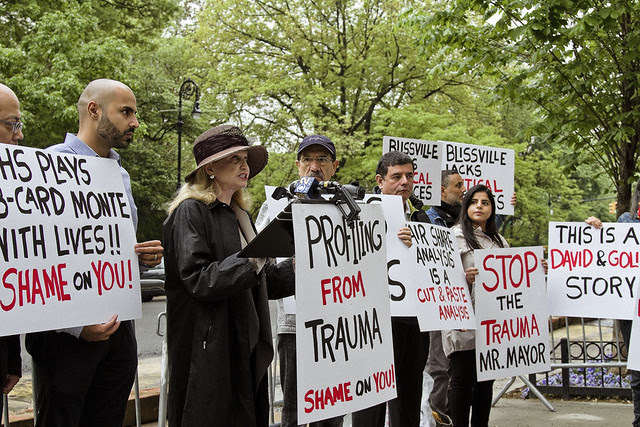 Monday last, at Gracie Mansion, Congresswoman Carolyn Maloney joined with the Blissville Civic Association to protest the Mayor’s plan at the gates of the Manhattan mansion he lives in. Western Queens’s elected officials stand in solidarity with Blissville, as does Brent O’Leary of the Hunters Point Civic Association, Senator Michael Gianaris, and your humble narrator. No more.

About the Author: Hank Linhart